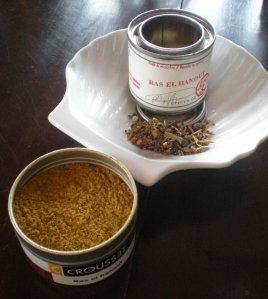 So what exactly is Ras El Hanout and where does it fit in the great spice world? It’s a signature spice of North African, and more specifically Moroccan cuisine, added to such dishes as mrouzia, tajine and couscous.

Pretty much every blog and on-line spice vending site offers the same blurb on the subject, specifying that the name translates as ‘’head of the shop’’, ‘’best of the shop’’ or ‘’house blend’’ depending on where you read (a ‘’hanout’’ being a small shop in Arabic). Each shop-keeper/spice vendor has their own blend and apparently in Morocco, the reputation of a spice shop rests largely on the quality of its Ras.

The list of ingredients comprising the blend is long, from a dozen up to a hundred different aromatics being included. Unlike a curry powder which is mainly comprised of binding spices (spices with a delicate, neutral taste such as turmeric, cumin and coriander), Ras El Hanout contains mainly spicy and strongly aromatic spices such as cubeb, rose petal, orris root, lavender, peppercorn, cardamom and cinnamon. As a general rule the blend is sold ground since the secret combination of ingredients is thus protected.

Historically, there is some indication that ingredients such as Hashish and Spanish fly were added before their widespread use became illegal. This may help explain, as can the floral inclusions in the mix, the spice being known as an aphrodisiac. Depending on the region the combination hails from, there can also be more exotic herbals added such as chufa, mastic, grains of paradise, monk’s pepper (vitex berries) and beladonna berries.

Although no two Ras El Hanout’s taste the same, and I’ve tasted many, a good one is very multi-dimensional in flavour with distinctive floral notes conferring some bitterness: surprising when contrasted to the sweet-spicy scent. It is best used as a finishing spice, added in small quantity at the very end of the cooking period so that it perfumes rather than overpowers a dish, and so that its most subtle notes are not lost.

Another interesting way to use the whole spice blend if you can find it (Épices de Cru makes a lovely one you can buy here: http://epicesdecru.com/products-page/epices/ras-el-hanout) is as an addition to herbal teas. To use it, add a teaspoon or two for every two to four ounces of herbal matter, depending on how much you want the taste to shine through. It will add depth and beauty and an ineffable quality to any brew.

For those who want to try their hand at making a house blend themselves, a basic recipe would include:

After that, any of the following spices can be added to customize the mix:

The ingredients can be left whole or ground and kept in a cool, dark location for about a month so that the flavours blend and mature.